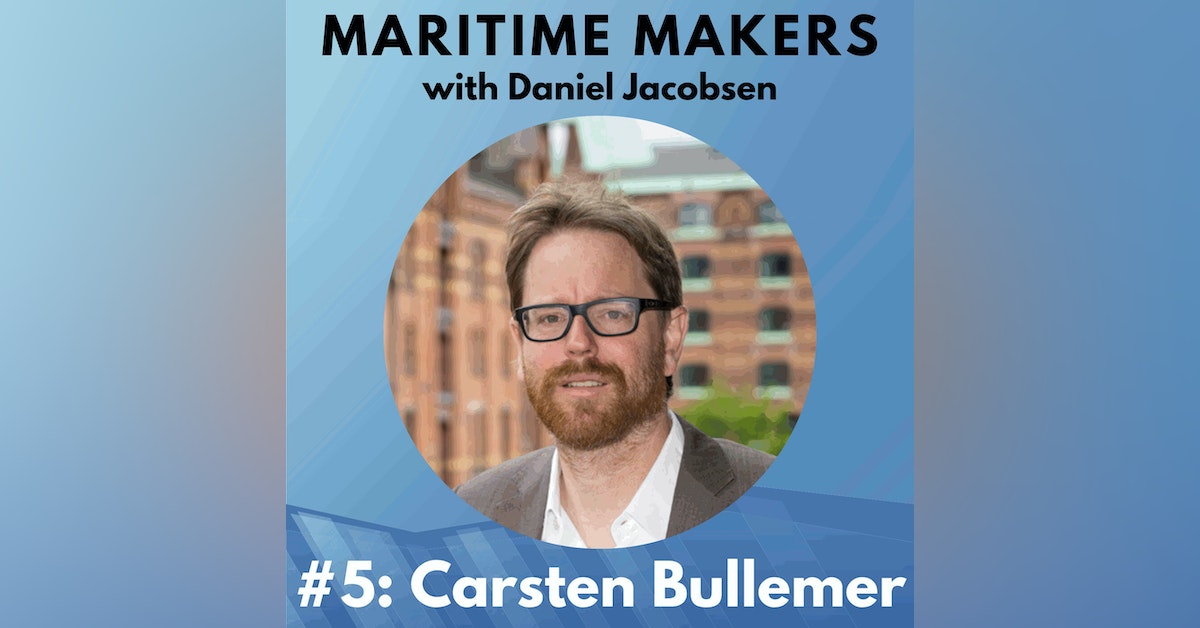 Carsten Bullemer is a serial entrepreneur and holds a diploma in logistics and computer science. He has started various companies in the field of digitalization and maritime operations, like vesseltracker.com, trusteddocks.com, searoutes.com and portcall.ai.
He also organizes conferences like seadevcon, and the AIS summit, gives talks and hold seminars to bring the ideas of the blue economy into shipping and maritime.
We talk about startups in the maritime industry, how hard it is to transfer learnings from one startup to the next. Carsten’s startups have successfully pivoted several times and we talk about the specific changes that were made. We also talk about Seadevcon, taking place September 22/23, 2021, in Hamburg, which will have a very exciting ‘startup night’ featuring famous sports stars.

Carsten’s first company, which he co-founded with two others, is called Vesseltracker. It targets the poor ETAs that ports and other stakeholders struggled with, using the then new technology of AIS to improve ETA estimates. Ten years later, it is used globally by 1000s of people.

It’s hard to transfer learnings from one startup to another. In a sense, you always start from zero. You should not make the same mistakes, but you definitely make other mistakes.

Often when people tell you: that’s a great idea, it doesn’t work out - and vice versa.

It can be a great strength to be forced to get your revenue from customers, because then you must create real value. Conversely, outside funding from VCs or governments can be dangerous in that they can make you a bit lazy, force you to chase further investments, and in the end, go in the wrong direction.

The maritime domain is a difficult area for venture capital, unless you widen it to include e.g. logistics. The market is quite small, hard to scale enough that this is an attractive market for venture capital.  But it can be a very interesting niche for business angels or for people, for families or for wealthy people to invest in some solid cases.

The most important thing for a startup is listening to clients. When several people have similar problems, then you may have an idea for starting a business.

Not all of Carsten’s businesses have been successful. He believes it has something to do with luck, but good timing is crucial. And then it's also always related with what kind of people and persons and maybe also investors you can deal with. The biggest mistake you can make is choosing the wrong people around you, in your startup.

Searoutes.com started as a voyage planning idea but pivoted towards CO2 reporting and optimization for logistic companies. Companies like Adidas and Ikea are very interested in this. Arguably, this is a good example of crossing over from the maritime industry into something broader.

Carsten and his team did something similar with Vesseltracker. Port agents, linesmen and tugboat companies were the initial targets. But the business model changed to targeting energy companies like Bloomberg, Thomson Reuters, and Glencore. They were not interested in ETA or port calls but were interested in global ship movement for market price predictions. And in this case, there likely will be a funding round where one or more VCs will join up.

Trusteddocks.com may also find itself being pivoted towards maritime equipment suppliers. Maybe I’ll make a future episode about how that goes!

Seadevcon is a fascinating startup conference taking place September 22/23, 2021, in Hamburg. It features a combination of maritime startups, founders, and a ‘startup night’ with participation from major sports stars like André Wiersig, extreme swimmer & book author. The theme is sustainability and the Blue Economy.

“I always had the best success when people told me not to do something.” - Carsten Bullemer

“The biggest mistake you can make with your startup is choosing the wrong people around you.” - Carsten Bullemer

Seadevcon. You can contact Carsten on LinkedIn if you want to contribute or just participate.