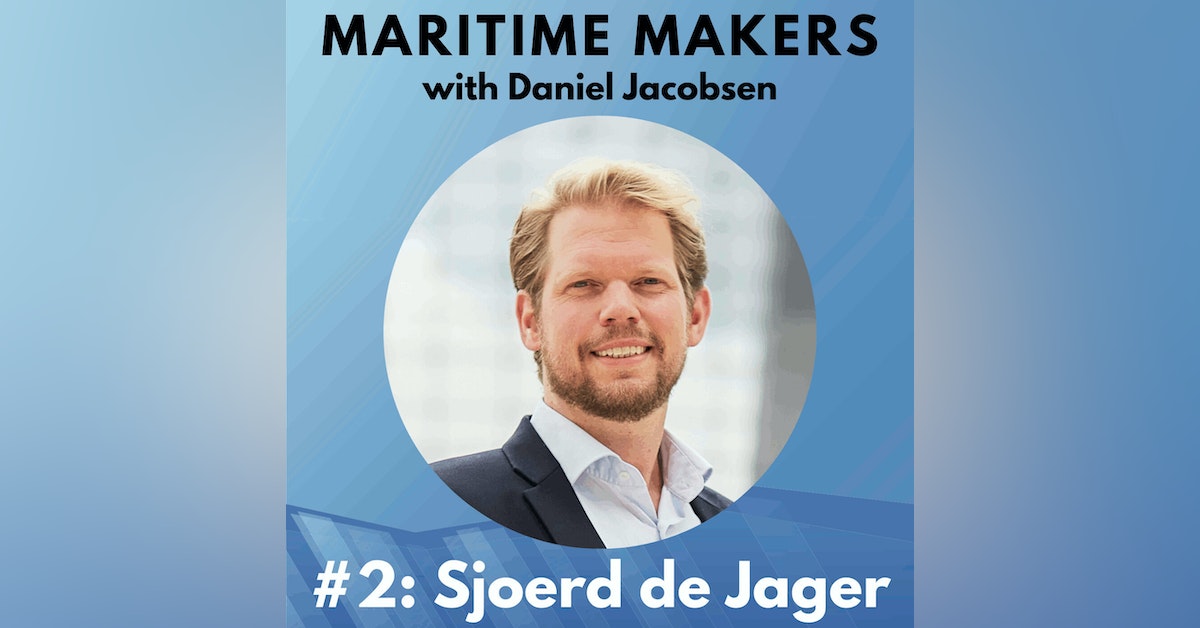 Sjoerd de Jager is managing director and co-founder of PortXchange.

He has (co) founded several start-ups and worked for large corporations including Phillips and DSM before joining the Port of Rotterdam in 2017.

We talk about the huge potential and challenges of transforming the port industry, specifically just-in-time arrival (JIT) and how increased collaboration, AI and data sharing are necessary to harness future disruptions.

Sjoerd and I talk about “Antifragile” and “Black Swan” by Nassim Taleb in relation to fragility and robustness in the maritime industry. The antifragile idea is to organize your company so that it not only survives but thrives under stress and shocks. We relate this to the recent shocks to the maritime supply chain from lockdowns and regulations. Sjoerd recommends orienting teams and culture towards innovation and continuous experimentation. At the same time, the industry is still rigid in many places and that is difficult to alter.

We discuss if the industry was robots enough to handle the crisis reasonably well, or if it adapted to cope during it. We agree that the overall performance under stress was impressive - though as Sjoerd points out, it came at a cost. An example of this being the current container imbalance and sky-high liner rates.

We talk about the Ever Given crisis as a black swan event. We discuss if it could have been predicted and the fact that the slot for the vessel at the port of Rotterdam was not released when it could have. Due to the structuring of ‘contract cascades’ including charter parties, other vessels could not access that slot even though that would have been efficient.

Sjoerd talks about the history and purpose of of PortXchange, which is to optimize port calls through JIT (Just In Time) arrivals. A big part of this is breaking down value chain boundaries  and standardizing information across the many different parties involved. The benefit is that the whole value and supply chains become less fragile and much more efficient in terms of fuel costs and harmful emissions. The potential total benefit is between 75 and 150 million dollars, which includes postponement of port investments from increased efficiency.

I ask Sjoerd to explain what PortXchange is doing differently to succeed in the JIT space where many others have struggled. Sjoerd emphasizes the holistic approach that PortXchange takes, including handling all trade and vessel types. This makes the problem more complex but it is the only way to success. PortXchange focuses on quick wins and a sense of community to create a sense of progress and collaboration.

A reluctance to sharing data is a common hurdle in maritime digital transformation. I ask how they convince the various parties that the benefit outweighs the risks. PortXchange start with already available, non-proprietary data - so it’s more about sharing early and automatically.

I ask Sjoerd to give advice to new leaders coming into the maritime industry, as he himself did in 2017. He emphasizes respect for the tremendous achievements of the maritime industry, while also challenging the status quo and shifting paradigms. There is still mistrust between parties, which isn’t working in the digital era. It does not make sense to rebuild the silos that were there already.

We talk about AI and machine learning in the maritime industry, one example being prediction of vessel arrival times. Sjoerd believes these are important disruptors and sources of new insights. The human planners can be augmented by AI as decision support. We agree that by its nature, increasing use of AI will diminish siloing as these often result from human tendencies for compartmentalization to manage complexity. In shipping, however, there is still a pervasive need for human interaction and decision making so good user experiences is important.

Finding AI talent is hard these days. Sjoerd explains how, at PortXchange, a strong learning culture works both ways - subject matter experts and data scientists educating each other on their respective skills.

We discuss the EU climate action plan and the search for alternative fuels as two of the major disruptions facing over the maritime industry, which is very different from the airline industry in this respect. In the latter, the two major players have already decided that hydrogen should be the solution. In shipping, there are many players and options and no clarity yet as to a roadmap. Fuel efficiency and schedule reliability will be more important than ever.

I ask how Sjoerd sees the industry as a whole changing in the light of these disruptions. He is hopeful that collaboration will become more common and holds the key for a net positive change. We talk about the possibility of future black swan events guiding the way and catalyzing the necessary changes.

“It’s an awesome time to be active in maritime logistics.” - Sjoerd de Jager.

“Create a sense of community [...] but also ensure that every individual party has a quick win.” - Sjoerd de Jager.

“Transparency is a two-way street. If you want to get information from others in order to make better decisions, you should be willing to share your information as well.” Sjoerd de Jager.

PortXchange, where Sjoerd is managing director.